Please note that Claudine is on extended maternity leave 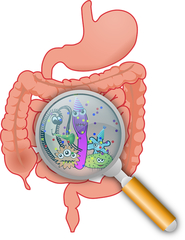 A trending topic in nutrition, is Fermented Foods. Fermented foods contain large amounts of probiotics – ‘good’ bacteria, that populates our gastro-intestinal (GI) tracts. A probiotic is any live micro-organism which, when consumed in adequate amounts, offers some form of a health bene?t.

The clinical evidence for probiotics is strongest for the treatment of diarrhoea, especially when caused by antibiotics. There is also potential benefit in treating irritable bowel syndrome. Some studies also point toward a benefit for depression, inflammatory bowel disease, prevention of certain infant allergies such as atopic dermatitis, and an overall general protection against infection; but these areas are being researched in more detail. A possible connection between gut bacteria and obesity and metabolic diseases like diabetes are also being investigated.

Although only a limited number of clinical studies on fermented foods have been performed, there is evidence that these foods provide health benefits. It is increasingly understood that fermented foods can also have enhanced nutritional and functional properties.

Fermentation is a process where organic ingredients are broken down into simpler elements, like for example the breakdown of sugar into alcohol. It is basically the beginning of the process of decay, but instead of letting the substance decay completely, the process is controlled and stopped at just the right time. Think of wine: if the fermentation process is not stopped at a certain point, the end product could be vinegar.

Fermentation is nothing new – our forefathers didn’t have fridges, freezers, supermarkets of canned foods, so they had to find other ways to preserve their food. The most effective way to prevent food from spoiling was through fermentation.

Fermented foods are easier to digest because the microorganisms it contains, have already started breaking down the sugars and carbohydrates in your food.
It can make certain nutrients more available for your body to absorb -especially B vitamins. Iron, zinc and calcium
It delivers living organisms straight to your gut, increasing the population of good bacteria already living there
It is cost effective: you may get up to one hundred times more probiotics than from most over-the-counter supplements
Your gut is the first line of defence against pathogens. Healthy gut bacteria are responsible for strengthening the effectiveness of your mucosal lining
Increases the release of digestive enzymes
Encourages the production acetylcholine - a neurotransmitter that helps to increase the movement of the bowel, alleviating constipation problems.
Destroy and inhibit the growth of pathogenic bacteria

Amasi in Xhosa and “maas” in Afrikaans, is a fermented milk product that tastes a lot like yoghurt. Traditionally it is made from unpasteurised milk which is left in a calabash until it ferments. Now, it is made with a culture and sold in supermarkets. Amasi contains a large amount of lactic acid bacteria which is a very effective probiotic.

Not all yoghurt contains probiotics. Choose products that include the full names (genus, species, strain) of their probiotics.

This spicy Korean condiment is a must try! It’s made from fermented vegetables and spices, mainly red cabbage and chilli’s. You can find it in the fridge section of most supermarkets. It has blood lipid lowering and glucose lowering benefits as well.

Pickling in vinegar is not the same as fermenting, in which the veggies release their own sour liquid full of friendly microorganisms. However, sour dill pickles do count as a fermented food. Make sure they are kept in the fridge section of your supermarket.

Kefir is a sour, creamy, and slightly fizzy drink, like thin yogurt. It’s formed after a culture of kefir “grains” (bacteria and yeast) are added to milk. Pour over cereal, use in smoothies or drink it as is.

Probably the most well-known fermented food, sauerkraut literally means “sour cabbage” in German. It’s made by finely shredding cabbage, layering it with salt, and letting it ferment.

Kombucha is a bubbly drink made from fermented black tea. The black tea is fermented through the addition of a SCOBY (symbiotic culture of bacteria and yeast) and sugar. The yeast from the SCOBY feeds on the sugar added to the black tea, leaving behind a slightly alcoholic product, which the bacteria in turn eat. The bacteria from the SCOBY ferment the alcohol made by the yeast, and turn it into acetic acid. Store bought types are high in sugar – rather make your own!

Choose fermented foods that are in the refrigerated section of the grocery store. Shelf-stable versions of these foods have been heat treated/ pasteurized to kill all bacteria, including the beneficial bacteria.
Eat the fermented foods in their raw state. Applying heat to these foods will also kill the beneficial bacteria and decrease these health benefits.
When choosing a product, look on the label for a description on the bacterial strains present.

Combine all ingredients in a blender and process until smooth.
Add a little bit of water if needed to reach desired consistency.

Claudine Ryan holds a Bachelor of Science degree in Dietetics and is registered with the Health Professions Council of South Africa. Claudine is passionate about people and their health, and enjoys helping others to optimise their health and manage their chronic lifestyle related diseases through sound nutritional therapy and practical advice.

9am till 6pm, Mondays to Fridays